Here is another small content  piece on Char v/s Varchar  from my Advanced SQL Developer Master Class. You can see all the blog posts in the Developer Series here.

Datatypes is one of the most under rated thing which we ignore when designing tables. In most of the consulting assignments that we do, we have found that when it comes to data type selection for an alphanumeric or character column, designers opt for Varchar or in worst of the cases Varchar(MAX). The reason they have for opting VARCHAR blindly is that CHAR takes more of storage as the empty characters are padded with spaces. This is correct, so when should we use CHAR datatype?

In this blog, I’ll share a scenario where in opting for CHAR datatype makes sense and saves storage too

Let’s first look at a scenario when CHAR is a bad choice.

The function fn_numbers returns number from 1 to n where n is the value passed as argument to the function.

Let’s now compare the space occupied by the two tables.

The output is as expected. The Employee_v2 occupies less storage compared to that of Employee_v1. Let’s look at the number of data pages used to store the data for the two tables

VARCHAR is certainly the best choice for this scenario.

Let’s say we now have a requirement to add a new column that will record Personal Identification Number (PAN) of an employee. A PAN is a 10-digit unique number assigned to citizen of India.

I’ll now insert 1 million records in each of these three tables.

Let’s now observer the space occupied by the three tables. 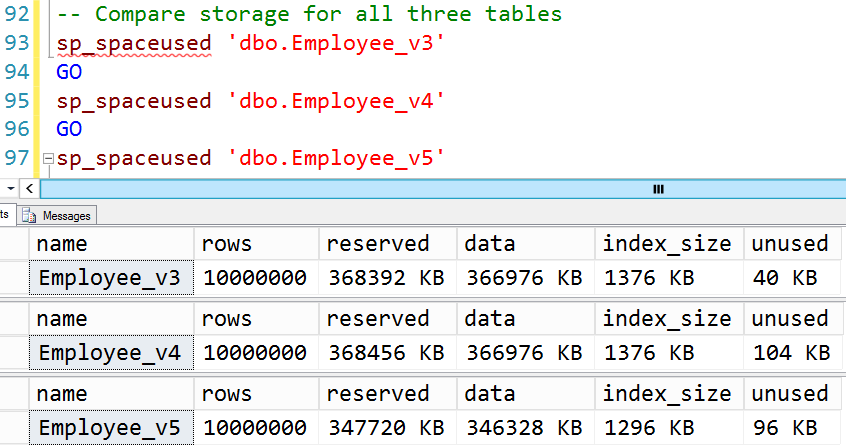 Let’s now check the page count for the three tables.

This difference is because of the fact that the storage size for VARCHAR is calculated as actual length of data + 2 bytes. This 2 byte is to store the variable length details for the VARCHAR datatype.

In our first scenario, this overhead didn’t come into consideration as we were actually storing variable length information. However, In the second scenario, ePan is a 10-digit fixed length string, which means that ePan will always be of 10 digit and therefore CHAR is better choice. There’s no point of adding 2 bytes for storing variable length information when we are storing fixed length string.

The savings are not only on table storage. We’ll even save storage when creating index on ePan column.

The first index query will fail as indexes aren’t allowed on a VARCHAR(MAX) column. An important point to consider when opting for a VARCHAR(MAX) data type.

Let’s check the storage cost for the two indexes.

To summarize, don’t blindly opt for datatypes, choose CHAR when you are certain that a particular column will have fixed length values.

Hope you enjoyed the blog post. There is more learning content in the Developer Series. Also take a look at SQLMaestros Master Classes.

About the Author: SQLMaestros Admin

Subscribe and instantly get 5 scripts, 3 Hands-On-Labs and 1 performance tuning video, instantly. And continue to get more content updates on SQL.