SQL Server 2014 In-Memory OLTP – Have You Tested It The Right Way?

Home/SQL Server/SQL Server 2014 In-Memory OLTP – Have You Tested It The Right Way?
Previous Next

SQL Server 2014 In-Memory OLTP – Have You Tested It The Right Way?

Hi Friends, Are you sure you have tested SQL Server 2014 In-Memory OLTP the right way?

In one of my recent conversations with a customer, a senior DBA from the customer side expressed that he does not see ‘exponential’ performance when he converts on-disk tables to In-Memory tables. He further expressed that performance by ‘leaps and bounds’ as claimed by Microsoft is only marketing rather than reality.

Is this your opinion too?

Well, instead of a knee-jerk reaction, I was interested in knowing how exactly he tested the In-Memory feature of SQL Server 2014. And after he explained his ‘basic’ test, I kind of figured out where he went wrong.

So here are the two versions of the test. One that he did, and the other that I told him to do!

And for the purpose of this blog post, I am using the codeplex sample provided by Microsoft (Of course, I do not have customers data or their scripts)

So, below are the two scripts: One inserts data (10000 records) in disk based tables and the other inserts the same amount of data in In-Memory tables (both tables are identical). Note the usage of @use_inmem parameter. Based on this parameter value, a stored procedure will insert data either in disk based tables or memory optimized tables.

And after executing the above scripts in SSMS, the execution times were as follows:

And here is what I told him to do:

I told him to run exactly the same test, but with around 100 concurrent users. And I advised him to use Adam Machanic’s SQLQueryStress or RML utilities to stimulate 100 users. So here are the results (this time I used 100 users, each inserting 1000 records. Not 10K, as this takes a loooong time for disk based tables) 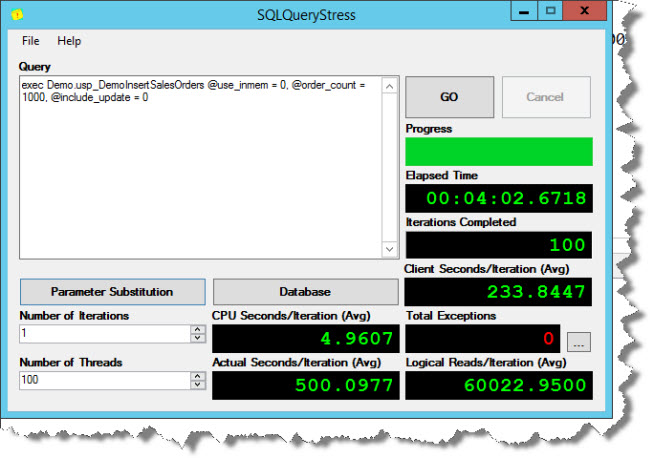 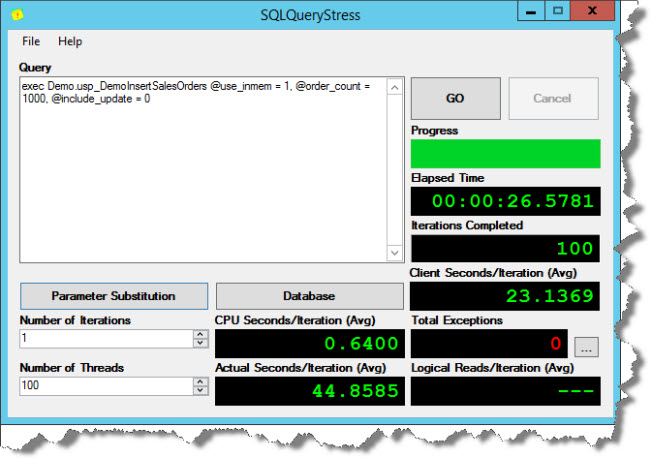 Before running each scripts/test, you can clear the latch statistics, as follows:

And after each script/test completes, you can record latch stats as follows and compare the difference:

My intention behind writing this post was to make sure that you test a feature the right way, and of course there is a lot more to be talked & discussed about In-Memory tables, it’s a huge topic. This post is just a quick know-how.

About the Author: Amit Bansal

Amit Bansal is always brainstorming around SQL Server. Despite working with SQL since 1997, he is amazed that he keeps learning new things every single day. SQL Server is AB's first love, and his wife does not mind that. He tries to share as much and spreads the SQL goodness. Internals and Performance Tuning excites him, and also gives him sleepless nights at times, simply because he is not a genius, but quite a hard worker and does not give up. It has been a long and exciting journey since 1997, you can read here: https://sqlmaestros.com/amit-bansal/ He is on Twitter: https://www.twitter.com/A_Bansal

Subscribe and instantly get 5 scripts, 3 Hands-On-Labs and 1 performance tuning video, instantly. And continue to get more content updates on SQL.